Prices go up when the timer hits zero

This product is Best Seller in:
george from champaign bought this item recently.
Product categories

We have smart cars, smartphones, and smart homes. Why not a smart self-defense product? Want to feel safer when you’re walking your dog or navigating parking lots? You’re always better prepared to handle an attack when you have a powerful stun gun at your side.

Stun guns offer excellent protection for security and come in a variety of models, sizes, builds, and capabilities. All of our stun guns are easy to carry and come with loops for easy portability and attachment to belts.

Introducing the world’s first smart stun gun the SMART 24,000,000* Keychain Stun Gun by Streetwise Security Products. This revolutionary new stun device is about a quarter of the size of real stun gun models and is light enough to be carried on a keychain. In the never-ending pursuit to build the perfect mini keychain stun gun, Streetwise has taken this one to the next level.

Easy accessibility is the key to effectively defending yourself. This is the first stun gun to replace the traditional safety switch with a Touch Sensing Safety when the unit is in your hand.

It puts the stun gun in the ready position and automatically turns off the safety. Not having to fumble with the switches and buttons of a traditional stun gun saves you valuable time when you need to defend yourself. The design also features battery status indicator lights so you will never be without a full charge.

Unlike most stun gun models on the market today, this Streetwise Keychain Stun Gun can be used while the flashlight is on (other models require you to change from flashlight mode to stun mode).

This Keychain Stun Gun has rechargeable batteries already installed. To charge, plug the mini-USB end into the charging port on the stun gun and the other end into your USB charging device. A block charger (not included) will allow you to plug the mini stun gun into a wall outlet. Additionally, you can use a car plug.

The battery Indicator Lights flash while charging. Four solid lights indicate a full charge. The LED flashlight works with a touch sensor. Placing your finger over the probes will turn the flashlight on â€“ removing it turns it off. The flashlight will turn off automatically after 20 minutes of constant use to prevent draining the battery.

You will also want to test the stunning phone periodically to make sure it is in good working order. To test it, turn off the safety by placing your finger on the Touch Sensor. With your thumb, press the Stun Activation Button for just a second to verify the stun works.

Sometimes, just test-firing this unit into the air is often enough to stop an attacker. Â As the electric current pulsates across the top, it creates an intimidating electrical sound. An attacker with any sense will be stopped in his tracks. If the sight and sound don’t stop him, a jolt from this unit certainly will.

Touching the smartphone stun gun anywhere on the assailant’s body will have an effect. And you don’t have to be concerned about the effects of the charge being transferred to you.

Even if the assailant touches you while being stunned, you will not feel the effects of the charge. Touching an assailant for about a second will cause minor muscle contractions and repel them quickly. If you touch them for three to five seconds it will cause a loss of balance and muscle control, mental confusion, and disorientation. It is advised that the device should not be used for longer than five seconds.

Anywhere you use the high voltage stun gun will be effective but the most vulnerable places on a human body to stun are the upper shoulder, the upper hip, and below the rib cage. All of the effects are temporary and don’t cause any permanent harm, but they will allow you enough time to escape from your attacker.

Stock bulk stun guns for your customers today, because stun guns are an intimidating and effective self-defense tool. This Streetwise Keychain stun gun also makes a great affordable option, and finding a reliable cheap stun gun these days is hard!

Whether you want a strong weapon near your nightstand or a flashlight with a kick to take on your nightly dog walk, we have an option for you. That’s why Cutting Edge Products is the best place to buy stun guns and wholesale self-defense products.

*Actual Voltage output is difficult to measure and verify, but this unit compares to other brands that claim to be 24,000,000 or more volts.

Before pursuing the use of a stun gun, it’s important to understand your state’s Stun Gun Law. It is perfectly legal to purchase and own a stun gun in the United States. However, some states like Massachusetts have law restrictions on how and where you can carry your stun gun.

Remember, even if your state does not have any specific laws regarding stun guns, it is always good to use them responsibly and only in self-defense situations. The quick answer is no; there are a few states like Massachusetts in which it is illegal to possess a stun gun as per the law. These states include Hawaii and Rhode Island; other states like Illinois have stun gun law to understand when it’s appropriate to use a stun gun. Various state codes govern the ownership of guns and other dangerous weapons; we’ve compiled a list by state below that identifies where it is legal to possess a stun gun.

In 48 of the 50 states, stun guns and taser devices are legal for defensive purposes if they meet the following criteria:

Stun guns can only be used for self-defense purposes

The person is not a minor under the age of 18

The benefits of having a stun gun

While stun guns are not lethal, they are still powerful weapons that can be used to disable an attacker long enough for you to escape. Stun guns work by delivering a high voltage shock that disrupts the electrical impulses in the body. This causes the muscles to contract and spasm, making it difficult for the attacker to move.

While stun guns are a great option for self-defense, they should only be used in situations where you feel like your life is in danger. Using a stun gun in any other situation could result in serious injury or even death.

If you are ever in a situation where you feel like you need to use a stun gun, make sure to aim for the attacker’s chest or stomach. Avoid using the stun gun on sensitive areas like the neck or head. Doing so could result in serious injury or even death.

While stun guns are legal in most states like Michigan, Illinois there are a few places like Massachusetts where they are not allowed as per the stun gun law. These places include:

If you are caught carrying a stun gun in one of these places, you could be subject to arrest and charges. Always be aware of your surroundings and familiar with the laws in your state before carrying a stun gun. By doing so, you can be sure to stay within the bounds of the law and keep yourself safe in case of an emergency.

We Carry Stun Guns to Keep You Safe

Here at Self Defense Mall, we understand the importance of stun guns for self-defense. That’s why we carry a wide selection of stun guns to choose from. We have stun guns of all shapes and sizes so that you can find the perfect one for your needs. We also offer a variety of accessories to go with your stun gun, including holsters and carrying cases. We have you covered whether you’re looking for a small stun gun to keep in your purse or a larger one to keep in your car.

If you choose to carry a stun gun, it is important to do so responsibly. Here are a few tips to help you stay safe:

Always keep the stun gun in a safe place where children cannot access it.

Only use the stun gun in self-defense situations

Stun guns are a great way to protect yourself, but it’s important to understand the laws in your state before you purchase one. Carrying a stun gun responsibly is also key to staying safe and avoiding legal trouble. By following the tips above, you can be sure to stay safe and within the bounds of the law.

Micro USB Charging Port: Charging the unit is simple. You can use the included USB charging cord in your computer’s USB port or use your own wall block charger in an electrical outlet or car charger. It is recommended that you charge the unit for 3-4 hours prior to its first use.

Powerful Stun Gun: Just test firing this unit into the air is often enough to stop an attacker. As the electric current pulsates across the top, it creates an intimidating electrical sound. An attacker with any sense will be stopped in his tracks. If the sight and sound don’t stop him, a jolt from this unit certainly will. Touching the assailant for 1 to 5 seconds has debilitating effects from muscle contractions to loss of balance and muscle control.

Touch Sensing Safety: Senses when the unit is in your hand puts it in the stun-ready position and automatically turns off the safety. You also use the sensor to turn on the LED flashlight.

LED Flashlight: This stun gun has a LED flashlight that provides a convenient source of light whenever you need it. Having a dependable and useful light source can make a difference in many situations. And it doesn’t have to be switched off to use the stun gun.

Lifetime Warranty: The FriPhone 14,000,000 Stun Gun is made by Streetwise Security Products, the leader in the stun gun industry, uses the highest quality components, and comes with a lifetime warranty.

Additional Accessories and Features: The Smart 24,000,000 Keychain Stun Gun comes with a rubberized armor coating that protects the unit and ensures a firm grip. It also has a quick-release key chain that gives you easy access and allows you to protect yourself at a moment’s notice. The small size of the stun is easy to conceal. It easily slips into a pocket or you can carry it in the palm of your hand. Comes in three fashionable colors: Black, Pink, and Teal.

There are no questions yet

Your question will be answered by a store representative or other customers.

Thank you for the question!

Your question has been received and will be answered soon. Please do not submit the same question again.

An error occurred when saving your question. Please report it to the website administrator. Additional information:

Thank you for the answer!

Your answer has been received and will be published soon. Please do not submit the same answer again.

An error occurred when saving your question. Please report it to the website administrator. Additional information:

There are no reviews yet.

GET A FREE HOLSTER AND 2 FREE 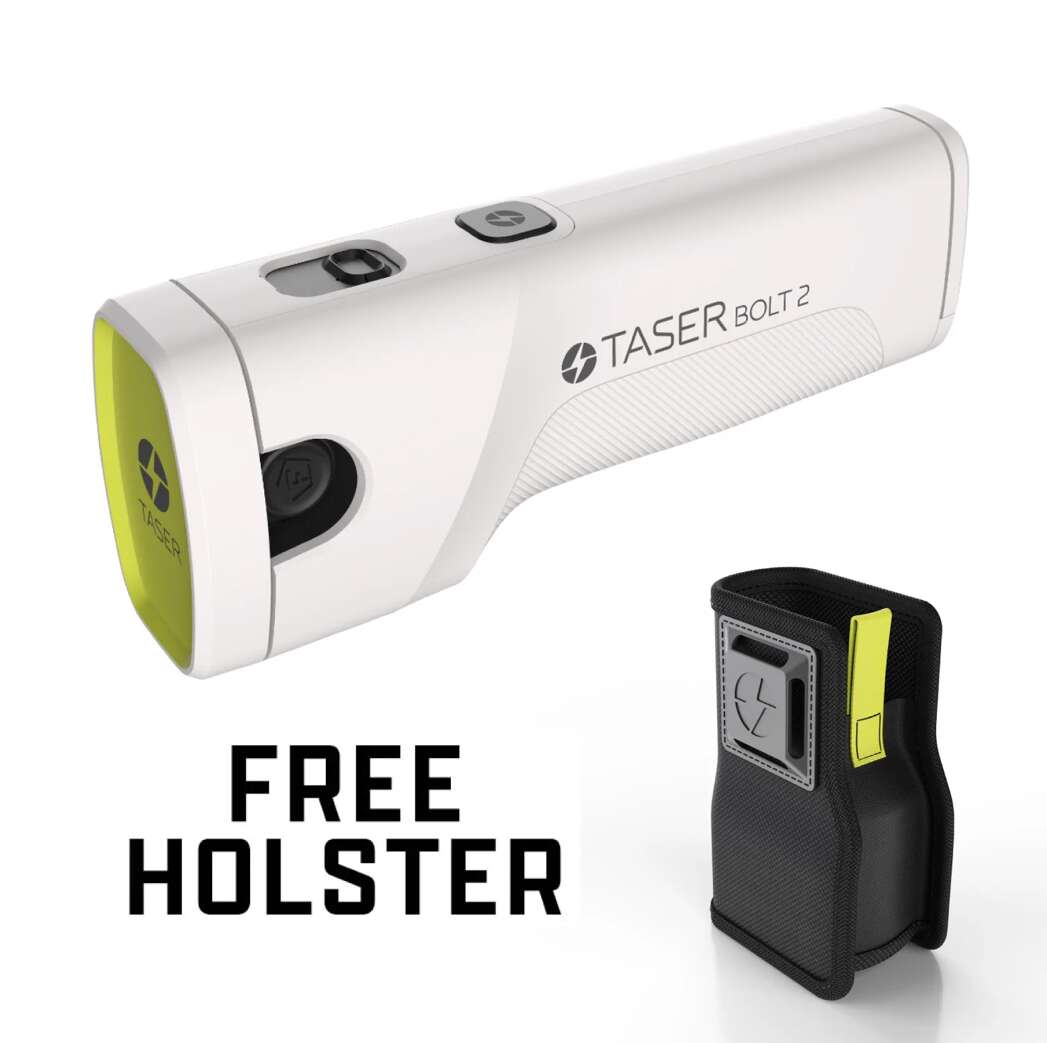 This site uses cookies to offer you a better browsing experience. By browsing this website, you agree to our use of cookies.
More info Accept
Close